Fashion Guide: How to Style Turkish Clothes for Women

Turkish fashion and its industry are no less when it comes to the big business world and market growth. Because Turkey is far ahead of the game, it is rising high and making its name internationally. Not just in trade but also in the fashion industry because the overtly progressive Turkish government is now not only welcoming international fashion brands to sell in Turkey but also exporting their fashion elements worldwide.

Women in Turkey prefer casual modern-style dresses, and clothes are the norm in Turkey. T-shirts, shorts, dresses, and jeans are common. Being modest and dressing elegantly as you would do in your home country would be rewarding in Turkey. While Turkish clothes for women include modernness and comfortability, being stylish is also vital for Turkish women. Turkish people also attach great importance to appearance and tend to treat elegantly dressed women more formally and respectfully.

In Turkey, secular and modern Turkish women dress similar to their western counterparts. Yet, as a culture dressing elegantly. Turkish women love classical designs with a good combination of colors. Transparent clothes and deep cleavage are not common.

Generally, women in Turkey wear the same clothes as European women but a little on the modest side. Turkish religious women do not follow a strict dress code like in most Islamic countries. They wear loose clothing and wear headscarves while being stylish and colorful.

1. Stylish casual dress for most places.

You will not see quite as many people walking around in casual clothes as you might in other countries. To fit the proper Turkish style, dress up a bit more (“smart casual”) for the cities. Of course, it is normal for the seaside resorts to look more beachy and laid back. The nearly universal summer tourist seaside dress of shorts and a T-shirt is fine, but make sure you aren’t walking into a mosque with this attire. As you go into the big cities of Turkey — just like New York, Sydney, or London—most of the local people around you will be more stylishly dressed.

Generally, in seaside resort towns, you may dress as you like. Outright nudity is illegal, but on remote stretches of beach, some tourists may sunbathe topless. You will see women wearing bikinis, one-pieces, and even full-body coverings at the beach. Feel free to wear your usual swimming attire. 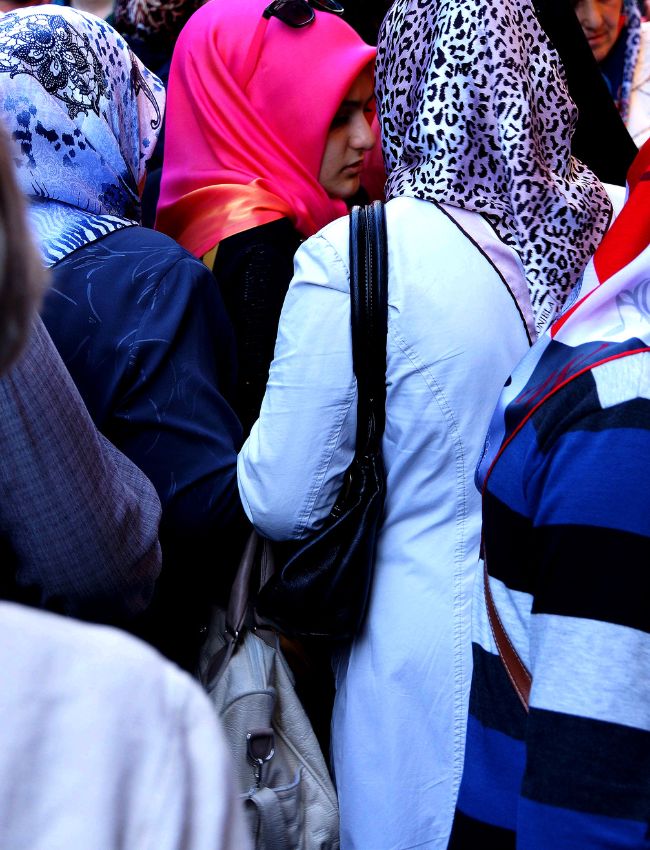 Clean, modest clothing is appreciated and often required when visiting mosques. In short, don’t show thighs, shoulders, or upper arms. Slacks, knee-length skirt or dress; blouse or top with sleeves to at least the mid-upper-arm. Have a headscarf to cover your hair. A light, a long-sleeved hoodie is a great idea in cooler seasons: just raise the hood when entering a mosque.

No shorts, sleeveless tops (tank tops), or revealing clothing should be worn by women or men. Shoes don’t matter as you will be removing them before entering the mosque (so slip-ons make it easier). At the most-visited mosques, skirts, scarves, and sometimes robes are provided to ensure you have dressed appropriately.

This modest style of clothing may not be your everyday attire, but you must respect the Turkish people’s culture as you step into their sacred places of prayer.

When it comes to clothing in nightlife, stylish dresses and shimmering outfits are common. Especially in Istanbul, Izmir, or coastal areas, nightlife can really be experienced at its peak.

In the more upscale restaurants, the dress is somewhat more formal than in the USA or Australia. Avoid wearing shorts and a T-shirt to a nice restaurant or dining room for any meal. In the evening, stylish dresses, slacks or skirts are preferred. For men, ties are not normally required, and jackets are usually optional.

Read This Too: An Introduction to Iran Women’s Fashion

6. Out in the Countryside

In rural areas away from the touristy locations, Turks will accept you as you are, but women in more modest dresses (sleeved tops, slacks, or knee-length dresses or skirts) may be seen as more worthy of respect. A foreign woman wanting to fit in with traditional village life would wear slacks, long skirts, or comfortable Turkish bloomers called şalvar, a top with sleeves at least to the elbows and perhaps even to the wrists a headscarf when out in public. Wearing this attire would be the most respectful to the village culture and allow you to connect with the Turkish people.

What Should You Wear or Not Wear in Turkey?

Legally, women are free to wear whatever they want in Turkey. Anyone would always suggest you wear comfortable, modest, and elegant clothes in Turkey. Revealing clothes or other kinds such as miniskirts, leggings, or sexy outfits are also safe to wear in Turkey. Especially in coastal areas, you will be hardly noticed.

Another thing that you may try may be the Turkish bloomers which are very loose leggings. These are called Şalvar (Shalwar). Shalwar is not common among Turkish people but is still worn by Turkish villagers in remote areas. Yet, it is a thing of the past, and it can be a stylish thing to try in your travels in Turkey. Salwars are comfortable, and many international friends love them.

The world of vintage was created from the phenomenon...
Read more
Previous article5 Ways to Wear Authentic 70s Disco Fashion
Next articleGothic Alert: How Gothic Victorian Dress Can Be Styled In 2022.