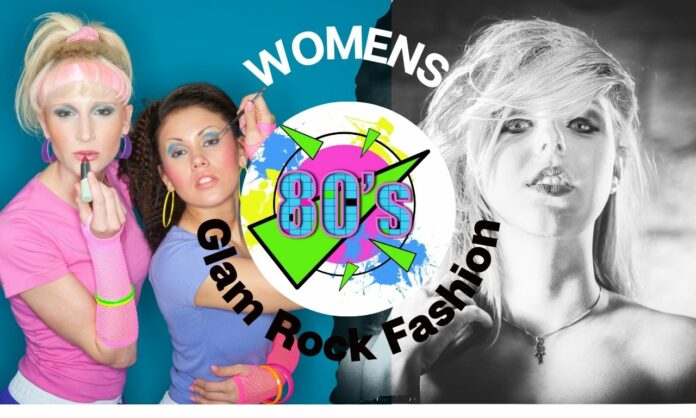 Tarzan hair, leather jackets with no shirts, and lots of eyeliner, it’s hard to miss what the most famous rock bands like Guns N’ Roses, Cinderella Kiss, and Billy Idol all wore. But despite these outrageous tastes in clothing, it blended well with their music, their fans loved it, and they enjoyed wearing it. So why not flaunt it? You might also see that many of these fashion trends are recycled today as some are just timeless.

Whether you’re thinking of starting a band or simply want to dress like a rockstar for Halloween, here are some of the 80s rock band fashion trends, so you’ll rock the part! 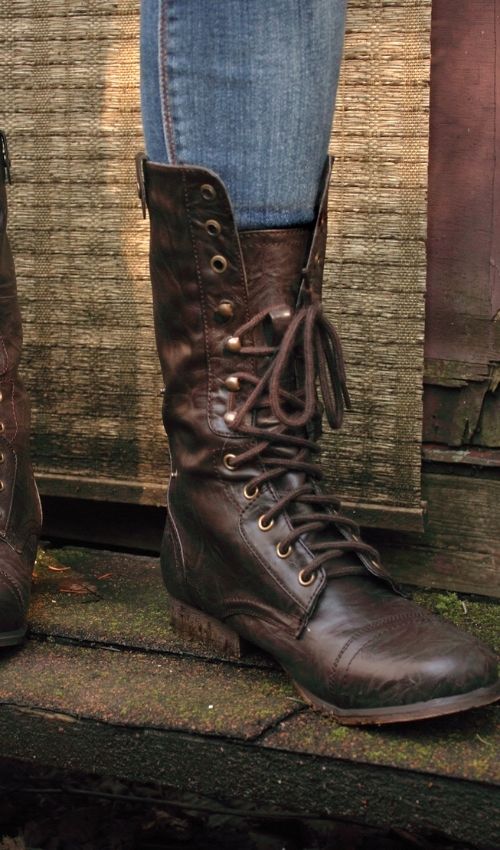 These babies were known for making rock stars look tough. They were worn mainly by heavy metal bands like Mötley Crüe, Iron Maiden, and Black Sabbath, but nevertheless, many artists wore them. Combat boots give the wearer more of an edgy, don’t-mess-with-me look. Many were also scuffed and had skulls with a brass buckle.

Using just sandpaper or scissors was a significant fashion statement to rip your clothing. It’s also a great stress-reducer! But those who wore torn jackets and pants were considered more hardcore. Motorcycle jackets and leather pants with ripped sleeves as well as tattered jeans and sliced shirts were all the hype.

Many of these trends are still popular today, not just for rock band fans but also for casual dress wear. Major fashion brands have also taken advantage of the trend by selling it themselves and marking up the price.

Biker gloves paired well with the long, snarled hair, aviator sunglasses, combat boots, and ripped leather jackets. Otherwise, your hands might look a little plain! Most biker gloves were also made of leather (go figure) and were pulled and fingerless, making it easier to play the guitar or drums. Most gloves are also unisex, but there were some for women that were lacier. These gloves made a perfect addition for enhancing the rock fashion statement. 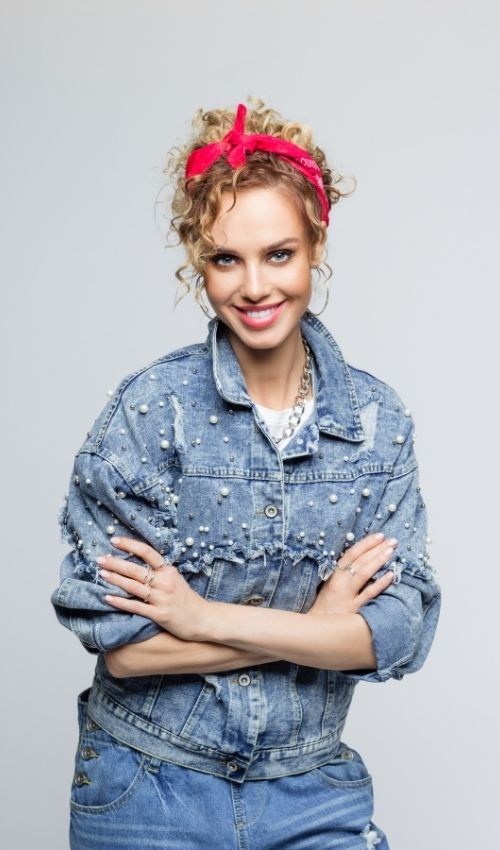 With long and heavy locks in the 80s, a bandana made a lot of sense to keep it all in place. Plus, they looked good with all that leather and tattered clothing. For some, these accessories were a necessity as rock artists depended on them to prevent their hair from getting messed up. 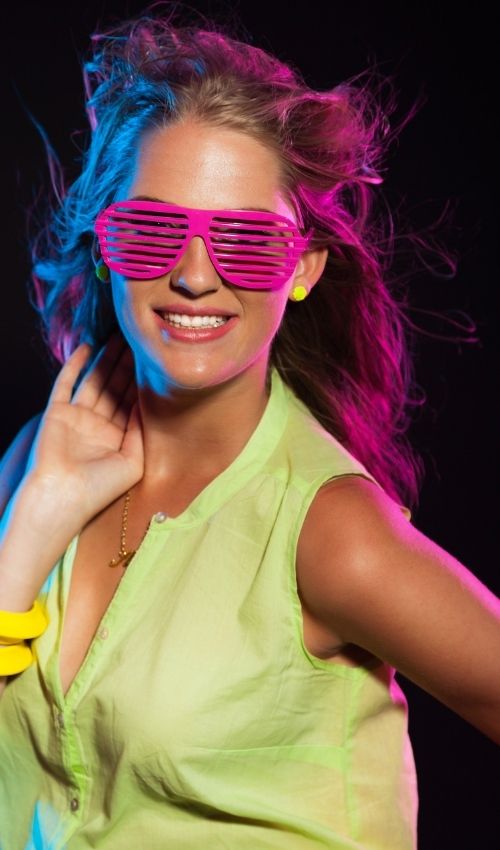 There were many brands, shades, styles, frames, colors, and sizes of sunglasses. From over $100 to less than $5 in the 80s, there were so many to choose from. And the selection has only grown with time. The crazy thing is that rock stars wore them all. Everything from purple shades with star-shaped frames to all black Ray-Bans, you could never go wrong. Today, they’ve gotten pretty creative with their outrageous styles, like with Lady Gaga. Some of the frames on hers look like a bow. 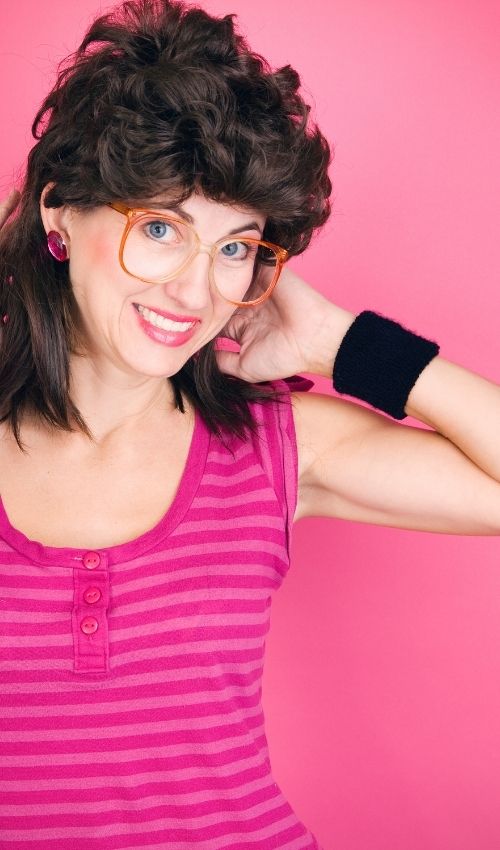 While the 80s were known for their mullets, they will only be an 80s thing. They paired well with the rock style look and were easy to maintain since they didn’t get in people’s eyes, but today’s young generation just isn’t interested.

But back then, heavy metal, screamo, and punk rock bands were all proud to rock this hairstyle, even the women. Only in our memories can we reminisce on how cool it was to have a mullet when going to a rock concert.

Another fashion trend that has withstood the test of time is washed and ripped denim. Even kids today are all over this trend that once started in the 80s. Why do you think this is? Because they were eye-catching. The more outrageous the style of clothing, the more heads that turned to gawk.

It wasn’t also unheard of to carry around thick, stylish chains hanging out from the pockets. Today, the chains have shifted to the R&B and hip hop style, but people still love to wear them to give off their edgy vibe.

In the 80s rock fashion for women, if you had flashy, big clothing that turned heads, you were part of the “in” crowd. Padded shoulder blazers were a perfect example of these outrageous trends, some with the shoulder pads standing extra tall to turn a few more heads. They came in various patterns and styles, with the majority being denim and ancient European prints.

Nobody could ever miss the layers of makeup worn by both men and women. Today’s kids would think that Twisted Sister looked like clowns, especially with Dee Snider’s white face, blue eyeshadow, red lipstick, and accented blush. But this was cool back then! It certainly made them look a little wilder and out of control, but that was what they were going for. So they hit it right on the money, literally!

Leather studded bracelets were another fashion accessory that went well with the tattered clothing, long hair, and denim jackets. All kinds of bands wore them, including heavy metal, classic rock, punk, and even some of today’s bands love them.

Coming in all different colors and styles, most guys chose to wear black leather studded bracelets while the women were all about the neon, some with studs and some without.

The 1980s rock fashion is a never-ending trend. The modish fashion trends of the 80s rock had set a proper example for the upcoming band industry. These are the perfect ten fashion trends to follow if you want to dress like 80s rock. Hope you liked the article! BE COOL, BE TRENDY.

So, you've finally decided to step up your fashion...
Read more
Previous article
How to Measure Vintage Clothing?
Next article
Vintage college t-shirts: The perfect way to show your school spirit